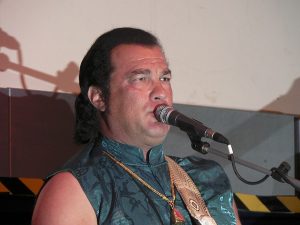 My Dad has always loved Steven Seagal movies. And as I kid I always cringed when one of his movies was on.

Whether you like him as an actor or not Seagal has made quite a bit of money over the lifespan of his career and has now created some rather interesting businesses.

How Much Does he Earn Per Movie?

Steven Segal’s movies have amassed more than $600 million worldwide. Despite Seagal’s seemingly declining movie career he still manages to rank in about $5 million per movie, according to Cracked.com

It’s hard to confirm Steven Seagal’s net worth. Online sources have reported it being $5 million, $11 million, and $16 million.

It appears that the net worth for Steven Seagal is less than $16 million. Considering all of the money he’s raked in during his lifetime that seems to be a pretty low number.

In addition to his acting and music efforts Seagal has also taken part in some pretty interesting business ventures including:

Steven Seagal’s Lightning Bolt Energy Drink – Steven Seagal came out with his own line of energy drinks. (Click through the link to see the product on Amazon.)

Knives and Weapons – Segal has also produced his own line of knives and weapons for sale in the past.

It appears that there is no real logic to Seagal’s business ventures and instead they’re all over the place.

Can We Learn Anything?

For someone with various business ventures and who is reported to earn $5 million per movie I would think his net worth should be well above $16 million dollars. Especially since net worth figures include all assets and not just cash and investments.

On the bright side at least he hasn’t gone bankrupt like many other former celebrities.

Interested in other celebrities net worth? Check out these great articles.