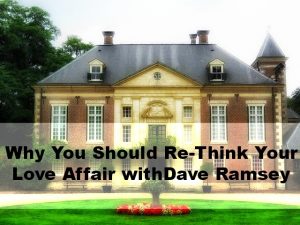 . I followed his financial plan to the letter.

Which, at the time, was a good thing. Even though the only debt I had was a few hundred dollars spread out across a couple of credit cards, I paid those off at lightning speed. I also paid off my car in two years rather than in five – thanks to my newfound interest in personal finance.

The problem I’ve since come across though, is that it feels like it’s no longer safe to listen to the “financial gurus.” For example:

Dave Ramsey is NOT Relevant to YOU

What I don’t like – okay, what I cannot stand – is being preached to by someone who has long forgot what it’s like to be among the regular folk.

Granted, Dave was/is smart. He worked hard. He’s a good salesman. He’s worth millions – thanks to people like us. Good for him. But taking advice like “never take out debt” from someone who is rolling in millions of dollars just doesn’t sit well with me. He can’t relate.  Maybe at one time he could, but he can’t now.

In 2010 Dave bought a new house valued at around five million dollars. One of the personal finance blogs that I frequent (Bible Money Matters) wrote a post asking if Dave followed his own financial advice and paid cash.

Here is an excerpt of Dave’s response (cut way down for length):

“Yes, it blows my mind how much it costs to maintain a lot of things God has called me to manage.”

“ I used to say ignorant things like “what does anyone need with a ______ like that” when I was immature. “

I’m calling bullshit. He used to say those type of things when he was immature? Or was it before his ego exploded? You tell me.

Buying a five million dollar house wasn’t a) surprising or b) all that bad, in my opinion. What I didn’t particularly like is the way he responded to it. He’d have been better off giving a one liner – yes I paid in cash or not responding at all.

Am I Being Too Harsh?

Maybe it’s just me, but after the Twitter comment and the blog post comment, Dave Ramsey sure seems awful arrogant. Plus, he has millions of dollars and I’m sure his money is being managed by a team of advisors. Mine is not.

I wouldn’t take financial advice from a professional basketball player, one of the Kardashians, or the president. (Maybe Mitt Romney though ;) ) And to me Dave Ramsey falls into these categories. He’s irrelevant.

Sure paying off debt, saving money, and investing for retirement is what you need to be doing. But personally, I’d rather hear financial advice from regular people just like me who are going out there and seeing what works.

What about you? Do you listen to Dave Ramsey or find him to be irrelevant?

Links to Love 5/16/14
What Does Financial Freedom Mean?