For a while, Vietnam, with a population of 95 million, was a model country for how to handle the COVID-19 pandemic. As of the first half of July, the Southeast Asian country boasted zero deaths from coronavirus and no local spread of the disease. They had moved quickly to close the China border, where the virus originated, and implemented quarantine and tracing measures early in the outbreak.

In a few short months, life had seemingly returned to normal, with travel bookings, live sports and schools all making their way back into society. As of the end of July, however, the country made a 180 degree turn in the wrong direction, with the city of Da Nang becoming the epicenter of the second wave of COVID-19, recording its first death. All told, Vietnam has suffered more than two dozen deaths from the virus as of the end of August.

With a second-wave of the pandemic taking hold, Vietnam’s economy, which is already dependent on exports for jobs, is reeling. So too are the households that have come to depend on remittances for their way of life, as Vietnam is not immune to the sharp drop in money transfers that has gripped developing countries as a result of the COVID-fueled global economic slowdown.

Remittances to Vietnam — which is one of the Southeast Asian countries Sharemoney supports for money transfers — are projected to fall by 10-15% in 2020, according to  Dr. Can Van Luc, chief economist at the Bank for Investment and Development of Vietnam. The drop could be even more severe, with economists predicting a 40% decline if the second wave of the pandemic continues to worsen around the world.

Remittances to Ho Chi Minh City (HCMC), which is the country’s hot spot for remittances, were roughly $3 billion year-to-date through July, reflecting a 1.2% decline vs. year-ago levels, according to Nguyen Hoang Minh, deputy director of the State Bank of Vietnam’s branch in HCMC, cited in VE Express International.

In the first half of 2020, the sharpest declines in money transfers to HCMC originated from Japan, Taiwan, South Korea, the UK and North America, according to remittance service providers cited by VE Express International. Some companies saw their money transfer volumes more broadly cut in half, fueled by Europe, North America and Australia.

In 2019, Vietnam saw nearly 150,000 of its citizens flee to find employment abroad, which was a 3.2% increase over 2018 levels, fueling a rising trend that has been unfolding in the country. Many of the Vietnamese workers living abroad have become unemployed, as have vulnerable migrants in host countries around the world, thwarting the usual pace of money transfers.

Last year, Vietnam was ranked as the No. 9 recipient country for remittances, when Vietnamese migrants living overseas transferred $17 billion to their families and friends there, according to World Bank data. Of that, $5.3 billion was directed to HCMC. Though those are only the official tallies. Reuters last year quoted Hanoi-based economist Nguyen Tri Hieu as saying,

“The remittance figures might be higher than reported as money transferred through unofficial ways, such as cash or as physical consumer goods, is not counted.”

It is remittance payments that have allowed Vietnamese farmers to afford to live in the rural village of Do Thanh, to purchase large homes in a community dubbed “Billionaire Village” that they would otherwise not be able to afford. Nguyen Van Ha, chairman of a rice-farming commune in the Nghe An province, told Reuters,

“70-80% of the villas here have been built with remittances…If you work in Vietnam earning dong, it would take a long time to build a big house like this.”

It was this province and Ha Tinh that were hit especially hard by the UK truck disaster outside of London in which 39 Vietnamese migrants perished in a refrigerated truck being smuggled into England.

As of the latest data from Pew Research, Vietnam was among the top recipients of remittance payments from the United States. Of the $148.5 billion in money transfers that Americans sent, $7.7 billion went to Vietnam, placing it in the top five receiving countries. The list was led by Mexico at $30 billion followed by China at $16 billion, India at $11.7 billion, and the Philippines at $11 billion. 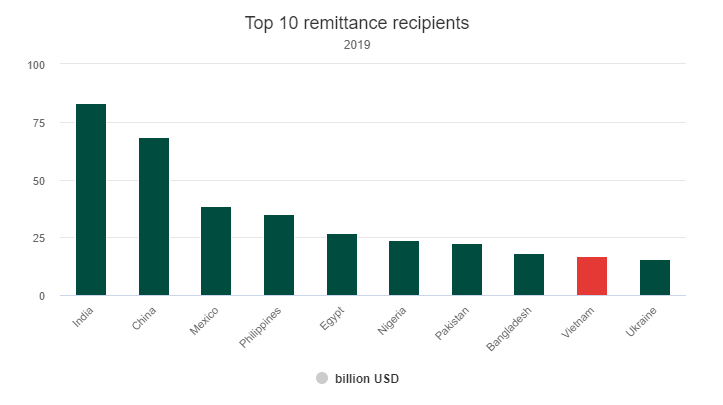 Incidentally, while Vietnam is a leading remittance recipient, it is also a host country to other migrants, including the Philippines. In fact, Philippino migrants are considered more vulnerable during the pandemic than others because they have so little money saved.

One such Filipino migrant, Mike Coronel, was featured in an article by Inquirer.net, which described how the Da Ning-based graphic designer, musician and photographer was left unemployed by the pandemic. He was forced to live off of his savings as a result. Not only that, but other migrants are coming to him for a loan to renew their own visas. As of April 2020, he said that if conditions didn’t improve he would make his way back to the Philippines.

Vietnam’s economy has come a long way. In the early 1990s, the country was suffering from poverty all around, with more than half of its population living in “extreme poverty,” as per World Bank estimates cited by Brookings. As of 2019, that number has fallen to less than 2% of Vietnam’s population. But households remain heavily dependent on remittances. According to the World Bank, personal remittances represent 6.5% of the Vietnamese economy as of 2019. 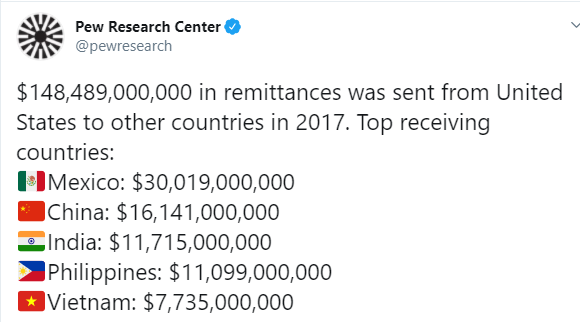 In 2019, Vietnam’s economy was growing hand over fist, with GDP having expanded 7% thanks in large part to a growing middle class, which as of 2018 comprised 13% of the country’s total population. This year, however, economic growth is expected to sink to 2.4%, which will be the slowest pace in two decades. And while that does not place it in the camp of its Southeast Asian peers that are headed for recession, Vietnam is not out of the woods yet. Its recovery is largely tied to both how it and the rest of the world handles a second wave of the pandemic.

Gerelyn Terzo is a staff writer at Sharemoney, a money remittance service that is passionate about improving the lives of immigrants. The granddaughter of an Italian immigrant from the town of Teora whose first steps in the U.S. were on Ellis Island, Gerelyn resides in New Jersey.

Stay Positive With These 21 Self Love Affirmations
How Much Is My Hair Worth?