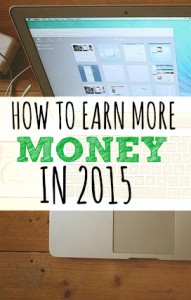 I’ve got to admit – last year my goal felt a little far-fetched. I was really struggling in some areas and wasn’t sure I’d be able to accomplish my goal. But this year? Things are completely different. I discovered that I had the capability to earn more all along, I just had to convince myself.

From my experience here’s what you need to do to make more money in 2015. (I bet it’s not what you think!)

Get Past Your Mental Barriers

For me making more money was a mental block.

In 2013 I was working as an insurance agent for $11.50 per hour with the occasional bonus. Believe it or not, in the town I’m from this isn’t a bad job. Factory workers who do hard manual labor don’t make much more and as far as the bigger jobs that require a degree, unfortunately, most of those are government jobs that max out around $50k a year.

That’s just how it is when you live in a small rural town.

Making more than $2,000 a month working 40 hours per week was hard for me. There was a ceiling to what I could earn. But, I didn’t want to accept that – my dreams were much bigger.

In October of 2013 I quit my job to freelance full time. I didn’t really have much to lose.

Getting to that $2,000 per month mark by freelancing was actually quite easy for me. Then, I hit a plateau. Having never earned much more than this I had a hard time pushing forward. In a way I didn’t feel like I was worth more. It took some serious mental shifts to overcome this.

Have Confidence in Yourself

Over the past year my skills have vastly improved. I’ve always known that I was smart but saying that to other people was just too hard for me. I didn’t want to come off as cocky so I never recognized my true worth.

However, as the year progressed some awesome stuff started happening and other people took notice too. I decided to accept the fact that there is a lot of stuff that I am good at. I owned it instead of brushing it off.

Since I have concentrated on doing the stuff that I am excel at at and blocking out what other people think I have almost doubled my income! I also made drastic changes in my business by only focusing on two of my best clients.

If you were expecting a step by step guide to making more money in 2015 maybe we can get to that another day. For now, you need to get over the mental barriers that are blocking you. Take a good hard look at what you’re good at. Once you’ve got that nailed down and can fully accept what you’re worth you’ll be able to surpass your goals.

In a nutshell, have confidence in what you do. Be proud of it. The rest will follow!