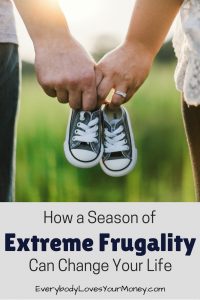 There once was a couple with a small income and big dreams. Most of those dreams revolved around the dream of having a family. They got married and danced down the aisle, hand in hand. Money was tight during those early years. Soon, a baby was on the way. With debts to pay and hospital bills waiting around the corner, extreme frugality became the name of the game.

The baby came and, with determination, the debt vanished. When baby #2 entered the scene a year and a half later, this young family’s finances took a sharp turn. The mother left her job to be home full-time. It was just your average single-income family of four, except they faced their biggest challenge yet: How to survive on less than $2,000 per month.

That family is my family. I’m here to tell you that, two years after becoming a stay-at-home mom, that season of extreme frugality taught us so many things. At times, it majorly sucked. But, the greatest lesson I learned was that the long-term gains are well worth the short-term losses. Which really should be called the short-term “not yets.”

How to Use Extreme Frugality to Change Your Future

The power that fuels every marathon runner is the knowledge that she’s racing toward a finish line. If you trap yourself into a mindset that things will never change and you’ll always be strapped for cash, then there’s a good chance you will.

If, however, you dedicate a temporary season of your life to aggressively saving, eliminating debt, and living on less, then it makes it easier to say no in the moment. That temporary change can evolve into a more balanced lifestyle change where frugality becomes an everyday thing.

Give yourself a finish line.

Working on a budget each month with my husband was the catalyst to our debt freedom. We made sacrifices along the way, but it wouldn’t have done us any good if we hadn’t committed to a written spending plan.

For example, through diligence and practice, we eventually were able to live on one income while both of us were employed full-time. That wasn’t easy! But, it made it so much easier to transition into a single income family when I did eventually retire.

Now that you’ve committed to extreme frugality for a season and have a budget, let’s chop the numbers. Normally, the small changes are a great place to start. For example, one less coffee per week, one less fast food run, one less shopping spree on Amazon.

But we’re talking about extreme change for a short amount of time. Consider everything. If you’re drowning in debt and using half your paycheck just for your mortgage, then it might be time to downsize. Car payments are another heavy hitter on your monthly statement. Time to sell your $30,000 car for a $3,000 used car? Perhaps. That’s a discussion you can and probably should have (with calculator in hand).

Put every expense on the table. Even the fun ones like cable, gym memberships, subscriptions, ballet classes for the kids, etc. Remember that it’s temporary and that the long-term gains are worth the temporary sacrifice.

Contentment consists not in adding more fuel, but in taking away some fire. – Thomas Fuller

What’s your #1 tip for living a life of extreme frugality? Share in the comments below.