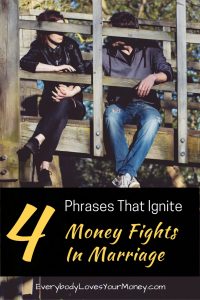 Money is the #1 cause of stress in a relationship, according to a survey released by SunTrust Bank. Divorces occur every day due to money fights in marriage. Since money will be a part of every relationship, throughout its entirety, let’s install a solid defense system against those damaging phrases that could ignite conflict.

Instead of sharing what you could say to your significant other about finances, I thought I’d tackle the opposite side. It’s important to know the weight of our words and how they affect those we are around.

4 Phrases to Avoid That Ignite Money Fights In Marriage

Every couple will certainly come with a different dynamic, so each of these hypothetical situations will fit you differently. The overarching theme, however, is to listen to your own words being said to your spouse, and to listen to his/her cues, too.

Shifting all of the blame to your spouse is a pretty solid way to start money fights in marriage. Even if he or she is mostly to blame for whatever destructive pattern has set in, reminding that person of past failures by using an absolute like “You always over spend and set us back,” only tears him or her down.

What to say instead: When temptations strikes and you want to lash out with the laundry list of faults in your spouse, try first to listen. Insert the word “we” into your conversation more than “you” or “I.”

For example, “Could we set aside time this week to go over some of our budget? I want to understand where you’re coming from, and it would mean a lot to me if you heard my side of the story, too.

Instead of continually reacting to one another throughout your marriage, try setting up some accountability ahead of time to ward off some of the strife.

For example, establish a dollar amount you won’t go over without speaking with your spouse first. The amount will vary from family to family, but a good place to start is $100.

Once you establish the amount, try not to browbeat your spouse when he or she comes home with a smaller purchase you didn’t know about. If it’s of concern, simply say so rather than induce guilt by questioning each purchase under $100.

Ranting to your friends in a one-sided, blame-spewing manner can be destructive and will do nothing to resolve the frustrations you feel. Imagine the roles were reversed. How would you feel if you knew your spouse spoke to his or her friends about all of your faults instead of coming to you with honest concern?

No way. It’s so easy to tap out, but this is a team effort. Just like children flourish when they receive active participation from both parents, your finances can evolve to do great things when you work together.

If you have a spouse who is naturally more inclined to run the budget, that’s great! Just don’t make the mistake of mentally checking out and letting him or her be in charge of everything. If you’re still carrying around a credit card or debit card in your pocket and you have no idea how much money is available to spend, conflict will eventually ensue.

I’ve heard it said many times and believe it from my own experience. Marriage is hard. Money fights in marriage can absolutely make it worse. However, think of all the great things you could do as a team if you work together toward healthy conversations, eliminating the burden of debt, and building a financially free life together.

What’s one word of advice you can share to help other readers prevent money fights in marriage?

7 Simple Debt Payoff Strategies You Can Use Today to Smash Debt
Financial Security Breach: How to Fix the Damage
Join Our Newsletter