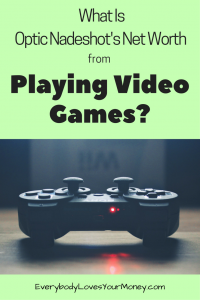 In other words, Haag made a million dollars before his 23rd birthday by playing video games.

What Is Optic Nadeshot’s Net Worth?

Net Worth: Estimated $1.6 million to $2 million

If you ever grew up playing video games as a kid, it’s likely you thought to yourself, “If someone could pay me to play these all day, I’d be the happiest kid on earth.” The success of online gamers like Nadeshot or others like South Korean gamer, Lee Young Ho, who earned nearly half a million dollars by the time he was 22, may be from video games, but it wasn’t just luck.

Competitive gamers invest countless hours of practice, research, networking, and competing to dial in their skills. Long after the excitement of the game wears off, committed gamers stick with it until they know the best ways to conquer the computer-generated enemies, understand every hidden path, or defeat other gamers.

Even still, how do these kids make all that money?

The Career and Income Streams of Matt Haag as “Optic Nadeshot”

The name “Nadeshot” is a Call of Duty reference to throwing a grenade then firing gunshots. Much of Haag’s money was earned by winning tournaments as a member of the Optic Clan competitive team. In 2014, he became the captain, raking in tens of thousands of dollars in tournament prize money.

So how does a gamer like Haag get so rich? Below are his primary income streams over the last 10 years of gaming:

As you can see, Optic Nadeshot’s net worth is a reflection of the vast income sources blooming via the Internet. One word of caution: If you’re considering the career of a professional gamer, be ready to invest a large amount of time. It’s an incredibly competitive industry. Treat it as you would any other job, and don’t skip other important responsibilities or activities outside of gaming.

Check out other celebrities net worth with this other articles.

Have you ever tried to earn money playing video games? Tell us about it in the comments below!

Understanding Your Credit Card Options
What Is Jaclyn Hill’s Net Worth?